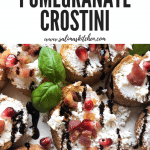 Winter is the best time to treat yourself with pomegranates as they are in season starting in late October and stick around through late December this year. I picked up three last week at New Seasons and had to go back again today for more! They're seriously that addicting.

Plus, the juicy seeds from this fruit are as healthy as they are popular. And with the majority of people having no idea how to open one, sharing this skill is basically the coolest party trick.

I like to toss pomegranate seeds in salads and desserts, eat them as is, or sprinkle them over savory dishes like this one for a sweet contrast.

If you are vegetarian you can still enjoy these goat cheese pomegranate crostini, just omit the pancetta for an equally flavorful appetizer.

How To Open A Pomegranate

What’s the easiest way to open a pomegranate?

At first, the process can seem intimidating as cutting through the center like you would with most fruit just won’t work. But don’t worry, once you get the right technique down, it’s a breeze and totally worth the effort for these crostini.

I’ve tried many methods including whacking the fruit with a wooden spoon, rolling it on the counter, and peeling it first. That said, the way my dad and grandma in Morocco taught me has always been the easiest method for me:

Now that we’ve tackled the art of opening a pomegranate, let's take a moment to appreciate the gluten free bread I'm using today.

These Hoagie Rolls from local Portland gluten free bakery, New Cascadia, makes the perfect crostini. They are soft and fluffy on the inside with a firm crust on the exterior just the way a traditional baguette should be.

My local New Seasons Market has New Cascadia's bread delivered weekly, which makes throwing this appetizer together a breeze. With all the delicious ingredients in this recipe, the bread still shines through as the star.

Cut thinly into slices and toasted to perfection.

The quality of your bread is important in making these goat cheese pomegranate crostini stand out.

Stop by your local New Seasons and check out their baked goods section or use your favorite kind of gluten free baguette.

This recipe does not contain the following allergens (read more about this on my disclosure page): 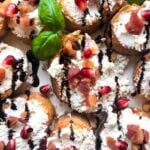 To Make the Balsamic Glaze: Heat one cup of balsamic vinegar in a saucepan until it thickens and reduces in half. Keep in your refrigerator for up to 1 week.

Pin This Recipe For Later: