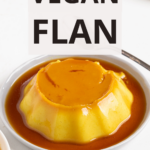 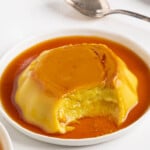 This delicious easy vegan flan recipe is inspired by Puerto Rican creme caramel, but uses oat milk, coconut cream, and agar agar to keep it plant-based. It's a luscious and creamy vegan version of the popular Puerto Rican dessert I grew up with.

If you've ever had Latin or Puerto Rican cuisine, you've probably tried some variation of flan. It's a dessert primarily made of eggs, milk, and condensed or evaporated milk.

Here’s a quick glance look at the ingredients you’ll need to make this oat milk flan:

How to Make Vegan Flan

Making this recipe is actually easier and faster than a traditional flan recipe. Because the ingredients are all plant based, they don’t need to be baked.

Instead, we chill our creme caramel in the fridge for this flan agar agar!

Start by making the caramel sauce.

Heat your white granulated sugar in a saucepan until all the sugar has dissolved and turned a golden brown color.

Pour caramel into your oven safe mold or molds.

Next, you’ll make the plant based milk filling in a large saucepan. Mix together the coconut cream, oat milk, vanilla extract and maple syrup.

Then sift in the turmeric (to give it a beautiful golden color), cornstarch and agar agar - this step helps to prevent clumping! Whisk them in until evenly combined.

Turn on your cooktop and keep whisking while you thicken the milk mixture.

Once it’s thick enough to coat a spoon without dripping, pour it over the caramel in your molds.

Transfer the molds to the fridge for at least 5 hours before flipping to reveal that beautiful caramel sauce. Buen provecho!

For this vegan flan we're using a combination of a super common household staple and a more niche vegan ingredient to thicken things up.

Caramel Sticking to the Pan?

Sometimes a thick layer of caramel will stick to the bottom of the pan, even after flipping the flan.

This can happen for a few reasons:

Either way, you can melt the caramel that is stuck to the pan over low heat until it returns to a liquid form, and pour over the flan.

In the future, try using a baking dish with a wider surface area on the bottom, and/or making and using less of the caramel mixture.

This delicious easy vegan flan recipe is inspired by Puerto Rican creme caramel, but uses oat milk, coconut cream, and agar agar to keep it plant-based. It's a great luscious and creamy vegan version of the popular Puerto Rican dessert I grew up with!