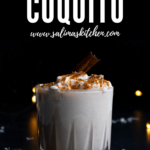 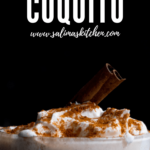 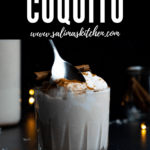 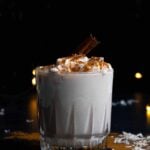 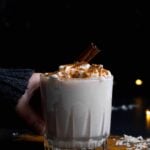 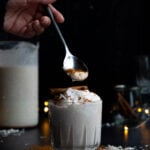 This Puerto Rican Coquito is a classic cocktail made with seasonal spices, coconut and rum, giving it a taste similar to eggnog.

Coquito is a popular drink enjoyed around the holidays in Puerto Rico.

The result? The creamiest, cinnamon & nutmeg infused cocktail. Almost like eggnog, but lighter and more flavorful.

There’s something really special about cozying up next to the fire with a sweet cinnamon seasoned drink during the cold Winter months. This cocktail has all of the elements of the perfect Winter cocktail, without any of the heaviness dairy brings to the mix.

If you’re looking to really impress, you can top your coquito with a generous dollop of whipped coconut cream, a sprinkle of cinnamon and a festive cinnamon stick.

While this Puerto Rican Coquito does require a night in the fridge to allow the rum to absorb the other flavors, the process of making it is actually quite simple.

Start by measuring out your rum and mixing in a large pitcher with some cinnamon sticks. This step helps infuse the cinnamon spice into the rum.

Next, all the remaining ingredients go into a blender to get blended to smooth, creamy perfection. Honestly I could drink it at this point with 0 alcohol and be perfectly content. But because it’s the holidays, we’re taking things to another level.

Pour your creamy coconut mixture into the pitcher with the rum and cinnamon sticks, cover and let it sit in the fridge overnight.

When you wake up, your coquito should be ready to serve! Not that I recommend starting the day with it… but I’m also not judging.

From here, your coquito should keep for up to 1 week in the fridge.

Traditionally, this cocktail is served as is, with a sprinkle of cinnamon and maybe some coconut flakes. I like to add whipped cream for a fun textural element. But because we’re giving coquito a vegan spin, we’re doing something a little different.

We’re topping ours with a bit of whipped coconut cream.

This recipe is made with easy vegan substitutions thanks to a couple different ingredients. In a more traditional Puerto Rican recipe, you would likely see cow’s milk, evaporated milk, and other dairy products in the ingredients list.

Today, we’re using sweetened condensed coconut milk and coconut milk as our vegan substitutes. I find that this makes the recipe both lighter and helps to amp up the coconut flavor.

Additionally, in the vegan whipped cream recipe I mentioned above, all you’ll need is a can of coconut cream and some powdered sugar.

Who knew eating (and drinking) vegan was this fun?

Looking for the perfect Puerto Rican meal to go with your vegan Coquito? Look no further!