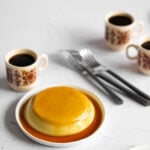 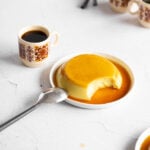 This vegan flan (also known as creme caramel) is a luscious and creamy plant based version of the popular Puerto Rican dessert I grew up with.

How to make a thick and creamy flan without eggs

When I first mentioned this recipe to my mom, she was both excited and confused.

Just the name ‘vegan flan’ feels like an oxymoron because the dessert is traditionally made primarily of eggs, milk, and condensed or evaporated milk.

So basically A LOT of dairy products. And as we all know, dairy isn’t exactly vegan friendly.

Part of what makes flan such a magical treat is the luxuriously thick texture, thanks to the eggs. So replicating that was definitely a challenge.

For this vegan flan I’m using a combination of a super common household staple and a more niche vegan ingredient to thicken things up.

Corn starch is a super effective, accessible and affordable thickener. Whisk it into a cool liquid before heating and watch the magic happen!

The second ingredient I’m using is a plant based gelatin alternative called Agar Agar. This ingredient has tons of different applications and is a really fun one to play around with.

These two thickeners combined results in a very creamy, not at all grainy consistency that tastes eerily similar to my classic flan recipe.

If you’re as impulsive as me, you’re already preparing a note in your phone with ingredients you’ll need to make this… so let me save you a few minutes!

Here’s what you’ll need to make the most delicious vegan flan I’ve ever had:

How to make it

Making this recipe is actually easier and faster than a traditional flan recipe. Because the ingredients are all plant based, they don’t need to be baked. Instead, we chill our creme caramel in the fridge!

Next, you’ll make the plant based milk filling in a large saucepan. Mix together the coconut cream, oat milk, vanilla extract and maple syrup (to give it a beautiful golden color). Then sift in the cornstarch and agar agar - this step helps to prevent clumping! Whisk them in until evenly combined.

Transfer the molds to the fridge for at least 5 hours before flipping to reveal that beautiful caramel sauce. And just like that, you've made a beautiful, egg and dairy free flan!